I had to do some banking last week, which almost always means a stop by Sap’s Fine Thai Cuisine on Westgate, since my credit union is cater-corner from Sap’s, in the shopping center from hell, right across Ben White Boulevard to the northeast. While perusing the menu I was waiting for gustatory inspiration, and it came from the vegetables that accompany the sweet and sour dish (S-P28): green beans, onions, garlic, tomatoes, eggplant, crunchy cloud ear fungus, and fresh chunks of pineapple. I ordered the dish with ground pork, which matches well with the sauce, but I also love it with shrimp and squid.

Most Americans immediately associate the term “sweet and sour” with that gloopy, overly sweet stalwart that coats chunks of battered and deep fried chicken or pork in the typical Americanized-Chinese restaurant. The neon-orange sauce that’s adorned with water chestnuts, vapid canned baby corn, and onion, and tastes more like ketchup than anything else. Although the Thai version originated in China, it tastes nothing at all like the American-Chinese version (nor does the original Chinese version for that matter). 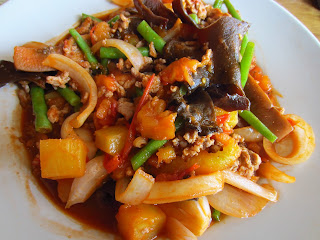 
The taste profile of the Thai (and the original Chinese) version is savory, with a hint of sweetness from the pineapple, balanced nicely with vinegar. Umami arrives courtesy of the fish sauce in the Thai version, and soy sauce in the Chinese version. And rather than coating greasy, battered chunks of meat, the Thai version is a quick stir fry of whatever protein you’ve chosen, matched with the still crunchy vegetables and that complex sauce. If you glaze over looking at a large menu, the dish is a culinary revelation and easy to find; just ask for S-P28. It is even more delicious when consumed with the rich, nutty flavor of Sap’s brown jasmine rice.


The ideal tabletop match would be a platter of pad sea-ew noodles (S-F3; AKA phat si-io, phat see yiew, pad see ewe, pad si ewe, pad see-iw, etc.).  You need to think ahead on this one, because you have to choose not only the protein, but the type of noodle. I went with chicken and sen yai, or wide, flat rice noodles (sen yai means “big strip” in Thai). Like the previous dish, pad sea-ew originated in China, but was morphed by Thai cooks to create a uniquely Thai flavor profile. The name of the dish translates to “fried with soy sauce” (referring to stir frying in a wok and not deep frying).  The soy sauce referred to is not Kikkoman, but a thick, slightly sweetened, sauce called Sea-Ew Dum in Thai (or Kecap Manis in Malaysia).  The dish is popular as a street food dish, and is common on restaurant menus. Think of it as a “dry” (meaning broth-less), version of lard nah (AKA rad nah), a dish with the same ingredients, but accompanied with a thickened, rich stock that’s seasoned with ground white pepper. 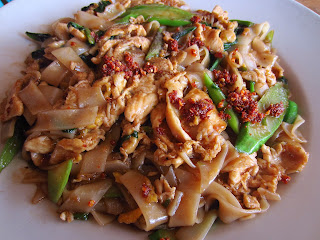 The key to a good pad sea-ew is cooking the noodles in a very hot wok, so that they get slightly charred; often referred to as “the dragon’s kiss”.  It’s a tricky process, since the noodles would love to stick to the surface of the wok. The typical protein is pork, chicken, or shrimp, mixed with some fluffy scrambled egg, and the only vegetable is Chinese broccoli, which is thinner and slightly more bitter in flavor (some even accuse it of having a slight metallic taste). The sauce is composed of a mixture of thick soy sauce, light soy sauce, a touch of sugar and vinegar, and lots of garlic. Some vendors and cooks will add a little oyster sauce as well. When it gets to the table, I add a little fish sauce and lots of Thai roasted chile paste to adjust the flavor to my desired taste settings. It’s a fantastic noodle stir fry that never fails to impress.


Sap’s Fine Thai Cuisine is my favorite Thai restaurant in town. They have the most authentic flavors, and very reasonable rates with big portions. I highly recommend the sweet and sour dish. It’s a different flavor from what you probably expect. Over the years I’ve eaten every single item on the entire menu, and each dish at each visit has been excellent. Sap’s is my go-to dining spot, and that’s with all cuisines and all of Austin’s restaurants considered. Very highly recommended.