Burger Not a Smash

Yesterday, while I was waiting on some reading glasses in Southpark Meadows, I had a little time to kill. I hadn’t eaten all day and was starving, and had a hankering for an Italian sub from Jersey Mike’s (they make great subs, by the way). But a couple of building islands down was Smashburger, and a buddy of mine had just told me about going there and liking their burger, so I figured, what the hell, I’ll give it a shot. He's the same dude that turned me on to Jersey Mike's. 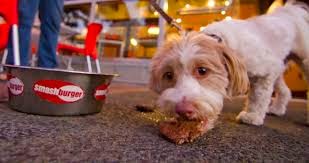 Smashburger started in Denver as an offshoot of Quizno’s Subs and they are one of the fastest growing franchises in recent history. They take a meatball of fresh Angus beef and smash the hell out of it onto the butter-laden griddle, forming it into a flat patty with one fell swoop. Supposedly it came to them in a flash of brilliance, and when they considered a name, Smashburger seemed obvious. Turns out the real Smashburger started over 50 years ago in Ashland, Kentucky, perched in the Appalachian Mountains. Dairy Cheer hamburger shop owner Bill Culvertson created the “smashburger” when a worker discovered that smashing the meat with a No. 10 bean can while grilling the patty was a great way to get the best flavor into a burger. Culvertson started his Dairy Cheer cafe as an offshoot of a DQ; he dropped DQ when they refused to let him sell hot dogs and burgers.


Culvertson eventually sold his Dairy Cheer smashburger business to Lou Compton, a woman in Pikeville who saw an opportunity to franchise the popular burger business. She and her husband opened a few stores, trademarking the motto “Home of the Smashburger”, and she collected royalties for 35 years. One day a customer came in telling her about a new Smashburger that had opened up in Lexington; same name, similar red and white artwork, similar cooking method. She sued and apparently got a good settlement, but the court outcome is mysterious.
http://www.bluemaumau.org/11457/smashburger_mysterious_trademark_settlement


Maybe the Colorado boys developed their project independently of the Kentucky folks, and maybe they didn’t. I’m more inclined to see Smashburger as a rip-off of Five Guys (the burger smasher looks very similar), and I’m pretty sure that I’ve seen and read about a lot of old-time smashburgers around the country on George Motz’s burger show, so it’s not a unique idea, or even an original concept, but you can’t use a trademarked name without coughing up some bucks.

I’ll also admit to being predisposed against meat manipulation. I’m a big believer that when you cook a hamburger, you do as little as possible to the meat. You mix it as little as possible, you form the patty as gently as possible, and you don’t jack with it once it hits the grill, except to lovingly turn it over one time during the cooking process. Smashing is not in my vocabulary. But the smashing wasn’t my real problem with this burger. 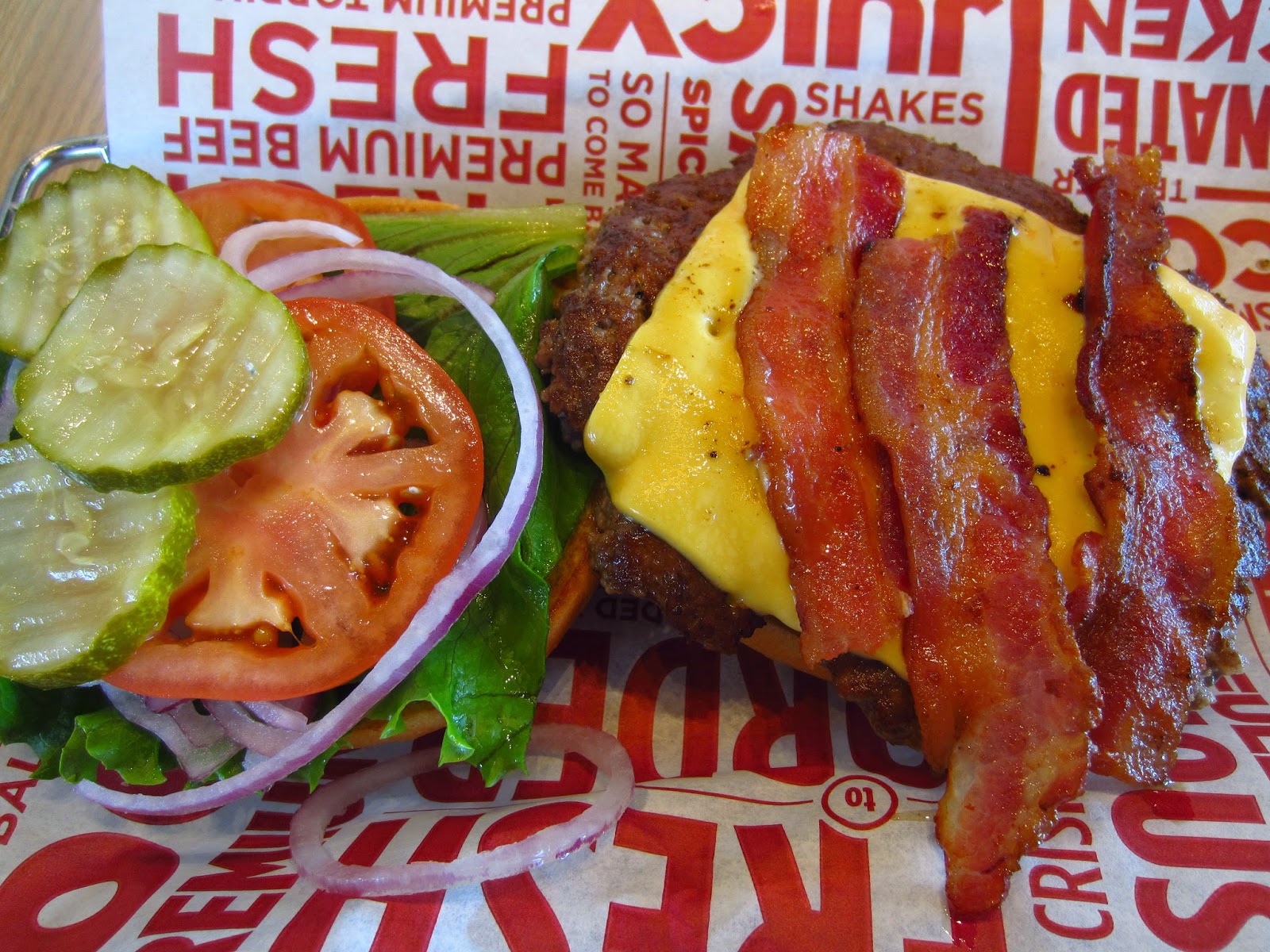 But, back to my burger at Southpark Meadows. I got a “Big Classic” with cheese and bacon. Lettuce and tomato are options for some reason, at no extra cost. I don’t really understand that angle, other than thinking that if they are optional, people might forget to ask for them, and the company can save some money. The patty stuck out the sides of the bun, extruded outward by the smashing process, and it was juicy and beefy tasting. The cheese had no flavor to speak of; certainly not a cheddar taste, with a texture and flavor more like a processed cheese. The apple-smoked bacon was thick-sliced, and crispy, and gorgeous, and there were three slices applied, but, oddly, it didn't really have much bacon flavor. The pickles, tomato, lettuce, and red onion (chintzy application of this item), were stars of the Big Classic show. The egg bun was stale and little on the chewy side, with no flavor to speak of; it was more of a containment device than a flavor contributor. First bite and I was ambivalent, and after eating the whole thing, I gave it a solid “It was okay.” It was juicy, but after examining the puddle in the basket, it was totally clear and oily (perhaps the “butter” they cook the meat in on the griddle?), with no signs of colored meat juices. It was a grease bomb, which normally wouldn’t repel me, but it managed to be greasy with no flavor. 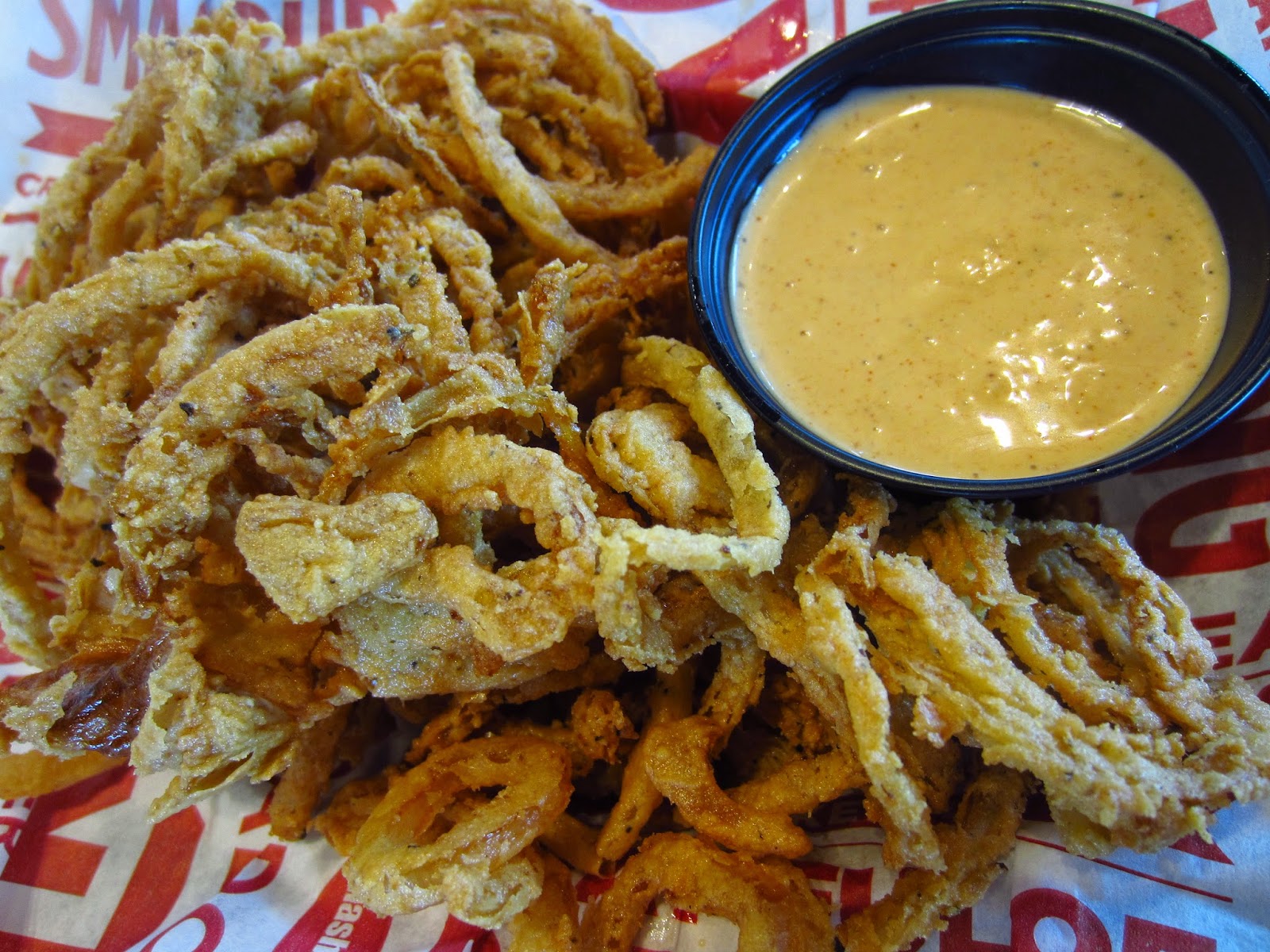 On the side I opted for their haystack onion fries, which are thin-sliced onions that are “hand-breaded” (how else would one bread thin sliced onions?) and served with chipotle aioli. The breading managed to stay on the onions, and they were crispy, but they tasted more of overly salted breading than onion and the chipotle and garlic in the mayo were way too subtle. Another big problem is that they are hard to get from basket to mouth without crumbling all over the front of your shirt. I’ll take a quality brand frozen, machine-breaded, big-ass, thick onion ring over these skinny puppies any day.


Bottom line? I got my glasses, spent $10.05 and tried Smashburger, and managed to navigate the traffic hell that is Southpark Meadows without incident. The burger was just okay, and I’ll probably never go back. Exact same thing I said about Five Guys. My guess is that the Dairy Cheer in Ashland, KY would make me a lot happier than either Smashburger or Five Guys, and yesterday, I really should have gone to Jersey Mike’s.

So we dropped by the old Tien Jin/new Sichuan River for lunch on Saturday, just to try it out. I was curious, since there seemed to be some affiliation with A+A Sichuan China, and I had heard that it was a renegade defection (ironic, since that’s what created A+A from Asia Café), but also heard that it was a completely sanctioned and affiliated expansion. Turns out neither is true. One of the principals of A+A has partnered as an investor with the Sichuan River owner, but has not left A+A. The menus are different, and the stuff that they both do is even different. 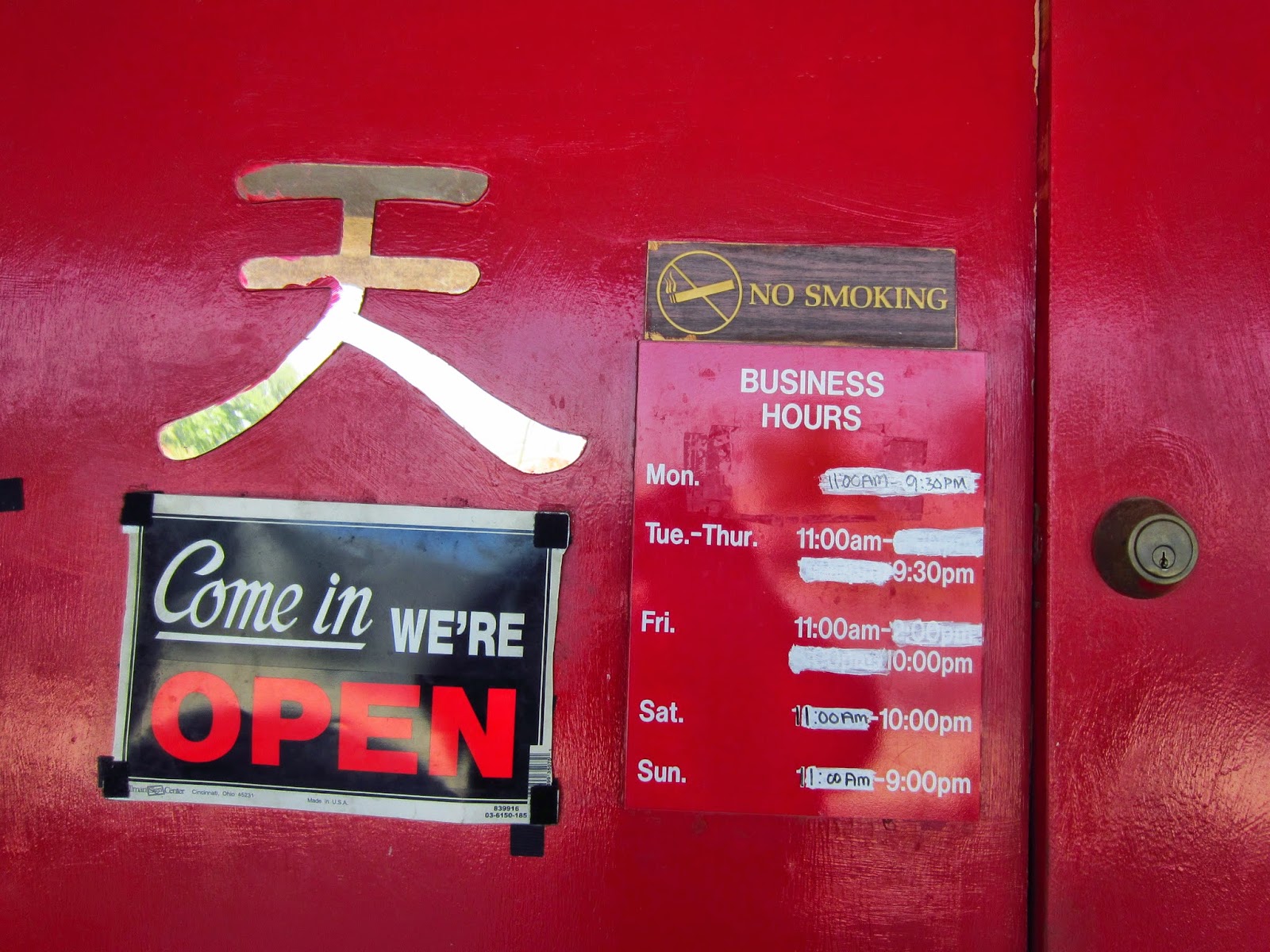 Michael and Johanna Chau had run Tien Jin for the last 21 years, cranking out their fine version of Hong Kong-style Cantonese, one of the very few cooking this style in Austin. Their youngest son had just graduated high school, and Michael wanted to complete his Chinese Medicine degree, so they sold to the new folks. The name outside hasn’t changed, and nothing inside has either, except for the desktop-printed menus. They have two: an American-Chinese standard item menu, and the Sichuan menu. For a peek at the Sichuan version see here:
http://www.yelp.com/biz_photos/sichuan-river-austin#8t64d8JhnKU-pro3dmxSsg
There is also a lunch special menu, pictured here: 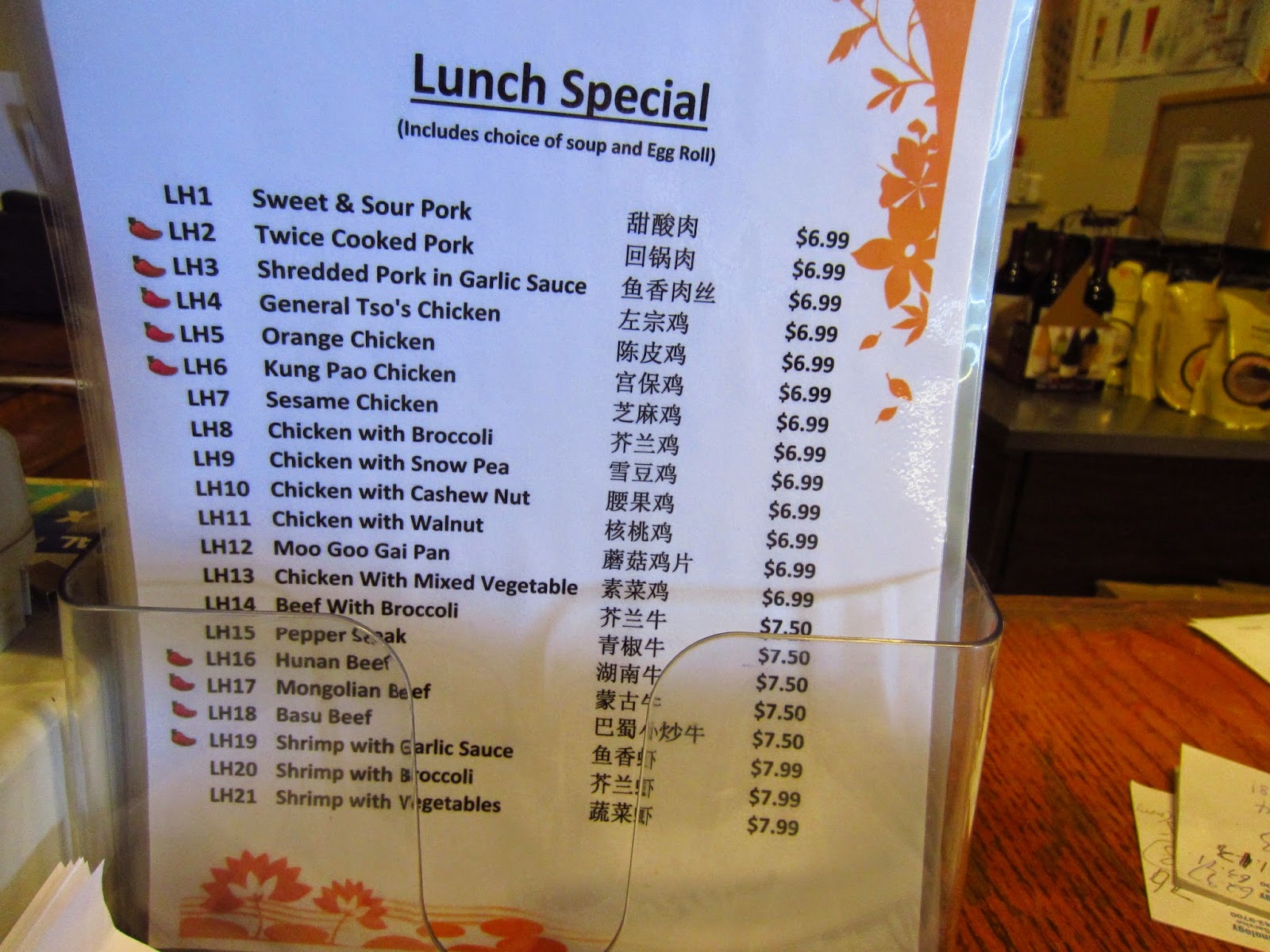 From the American menu we ordered their Hot and Sour soup ($1.50 - SP3) which has a nice  rich, porky stock (but no actual minced pork), and good balance twixt hot and spicy, and sour It is a good version and the stock is rich and complex. The Wonton soup ($1.50 --SP1) features a rich chicken stock, with a homemade dumpling skin; the filling is a little on the bland side. 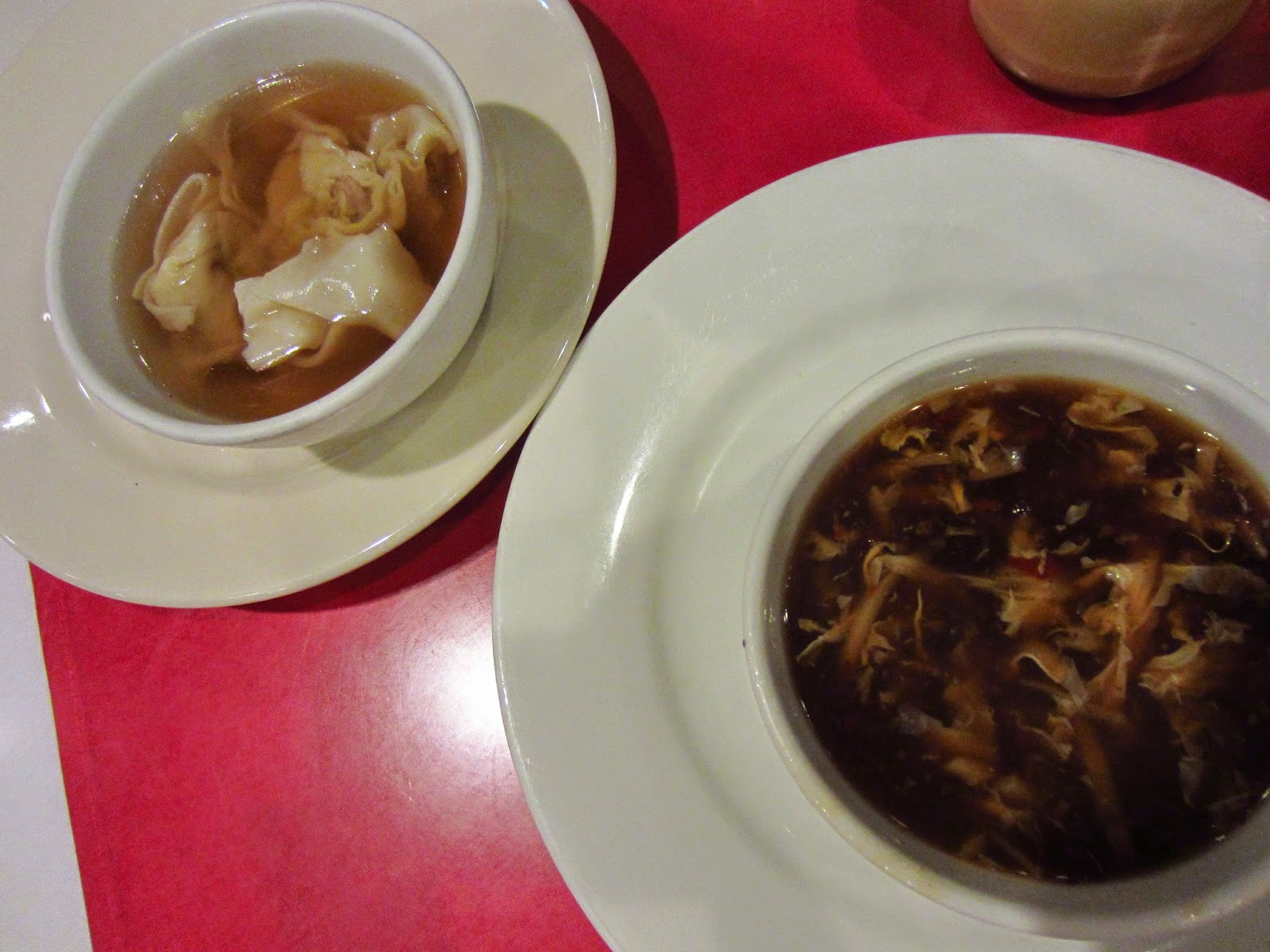 Steamed dumplings ($5.95 for 8 -- AP8) have a pierogi-like texture on the homemade skins (a little dense, a little thick). The filling is a little under-seasoned, but the dipping sauce is excellent, with good balances of vinegar, sweet, ginger, salty soy, and zippy chile oil. Oddly, the homemade chile oil has zero ma la flavor, that spicy numbness that is generated by Sichuan peppercorn. 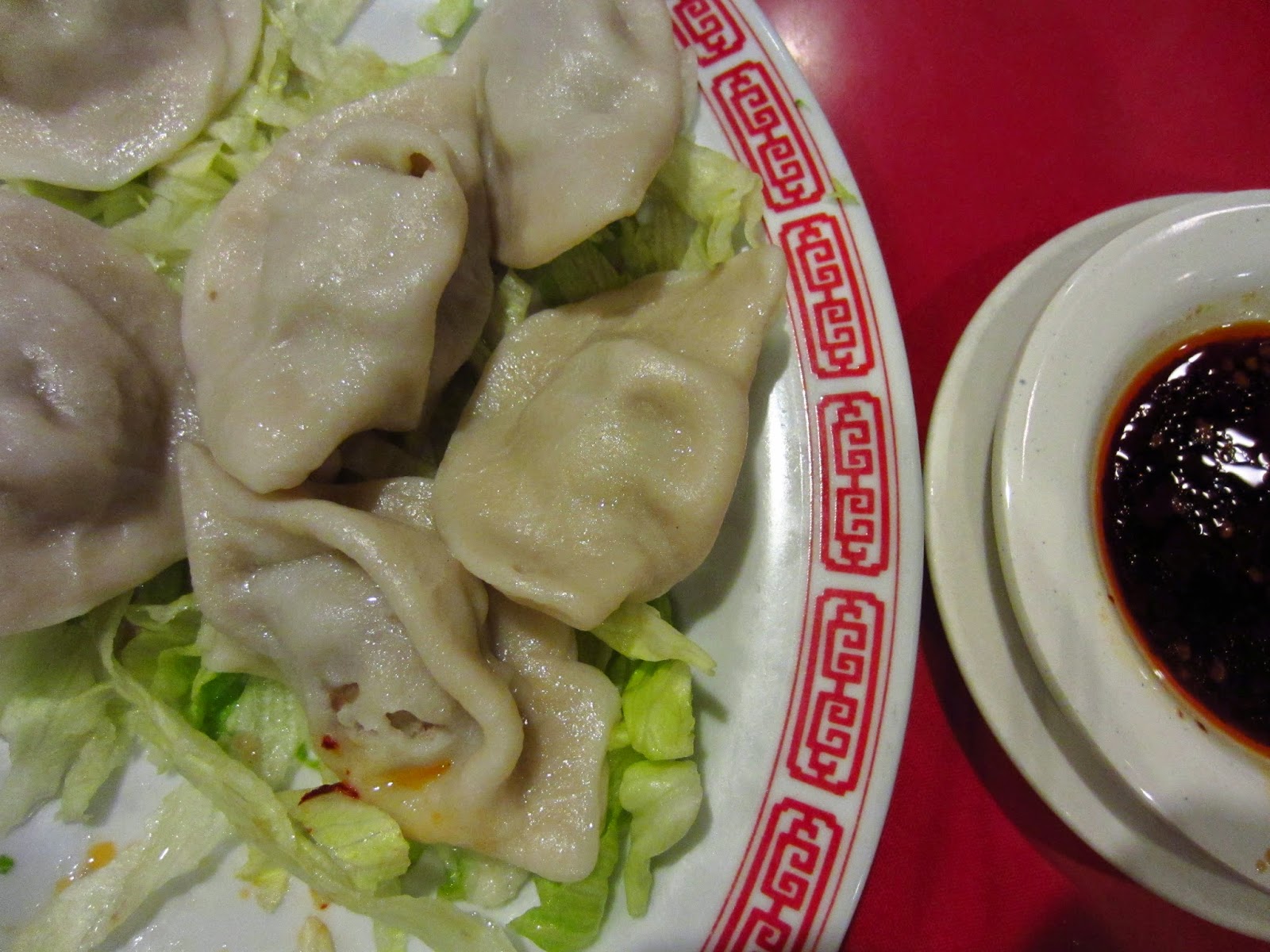 From Sichuan menu world we chose Stir Fried Smoked Pork ($10.50 -- PK6)  smoked pork belly slices with leek, garlic, and onion, fried red chiles, red oil, and a little brown sauce. It was excellent, with great mouthfeel from the baconossity. A minor complaint: the pork skin on the edge of the pork belly was a little on the tough and chewy side. 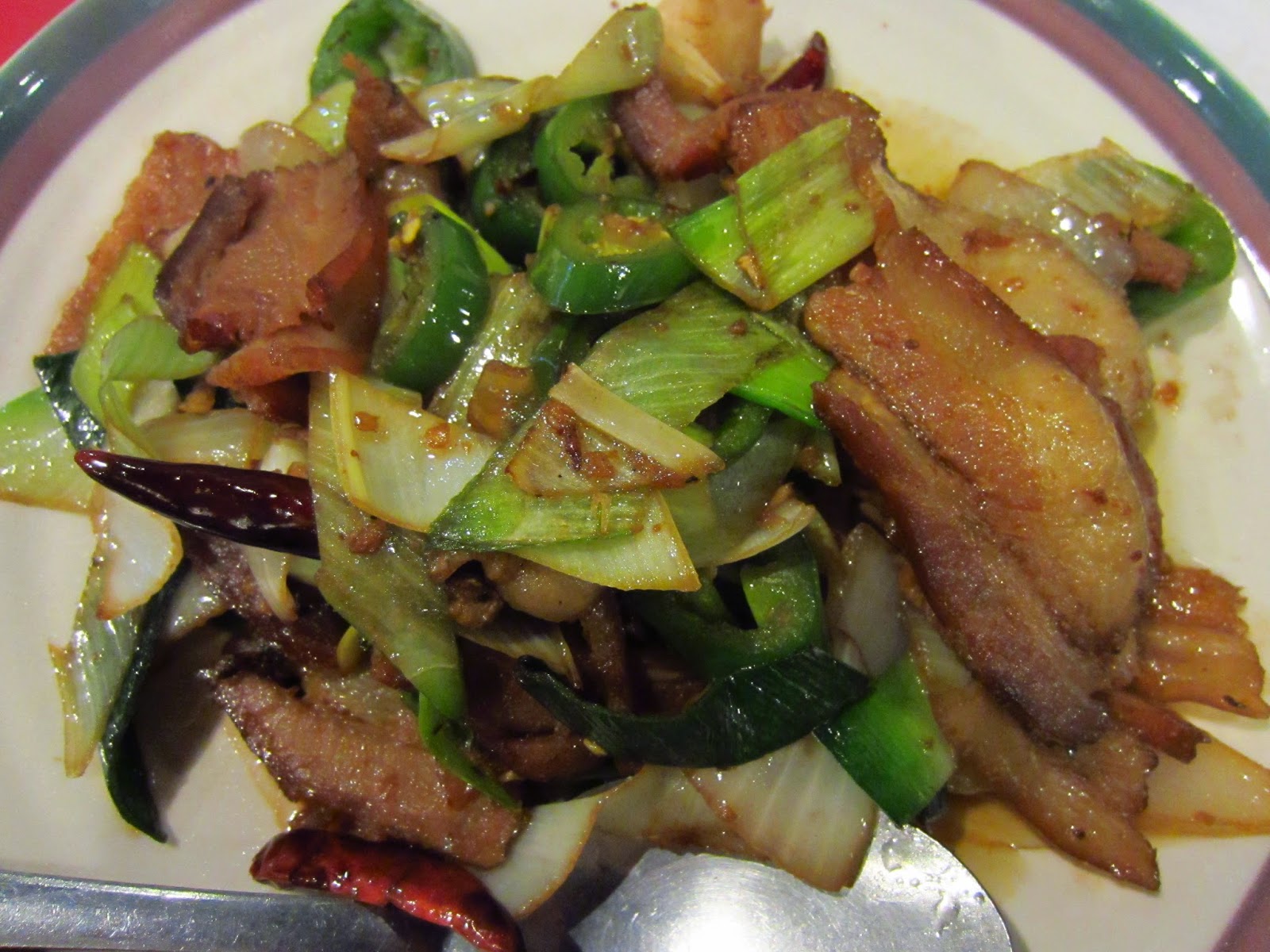 Fried Chicken Leg Meat ($9.50 – CK20). Finally, some boneless chicken thighs are being served by someone, and not that crappy chicken breast! The dish was loaded with sliced jalapeños, onion, garlic, zucchini slices, and brown sauce. It was a hit. 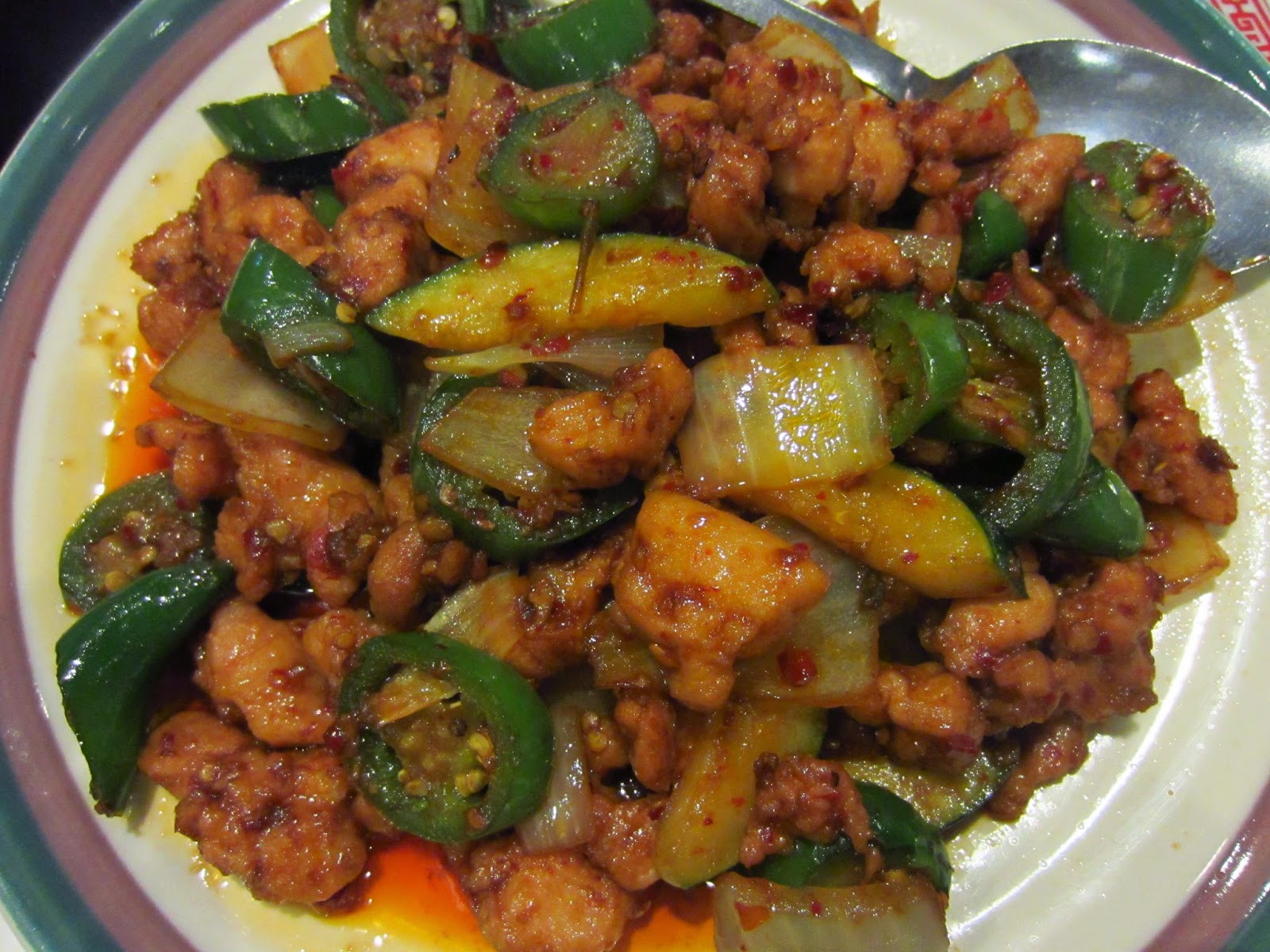 Ma Po Dofu ($8.25 – VG8) is listed as vegetarian, so ask for ground beef or pork if you want it included; we gave them the option and got ground beef. The dish has excellent flavor, with a good balance of richness, garlicky savory taste, bean paste and chile. It is a really good version. 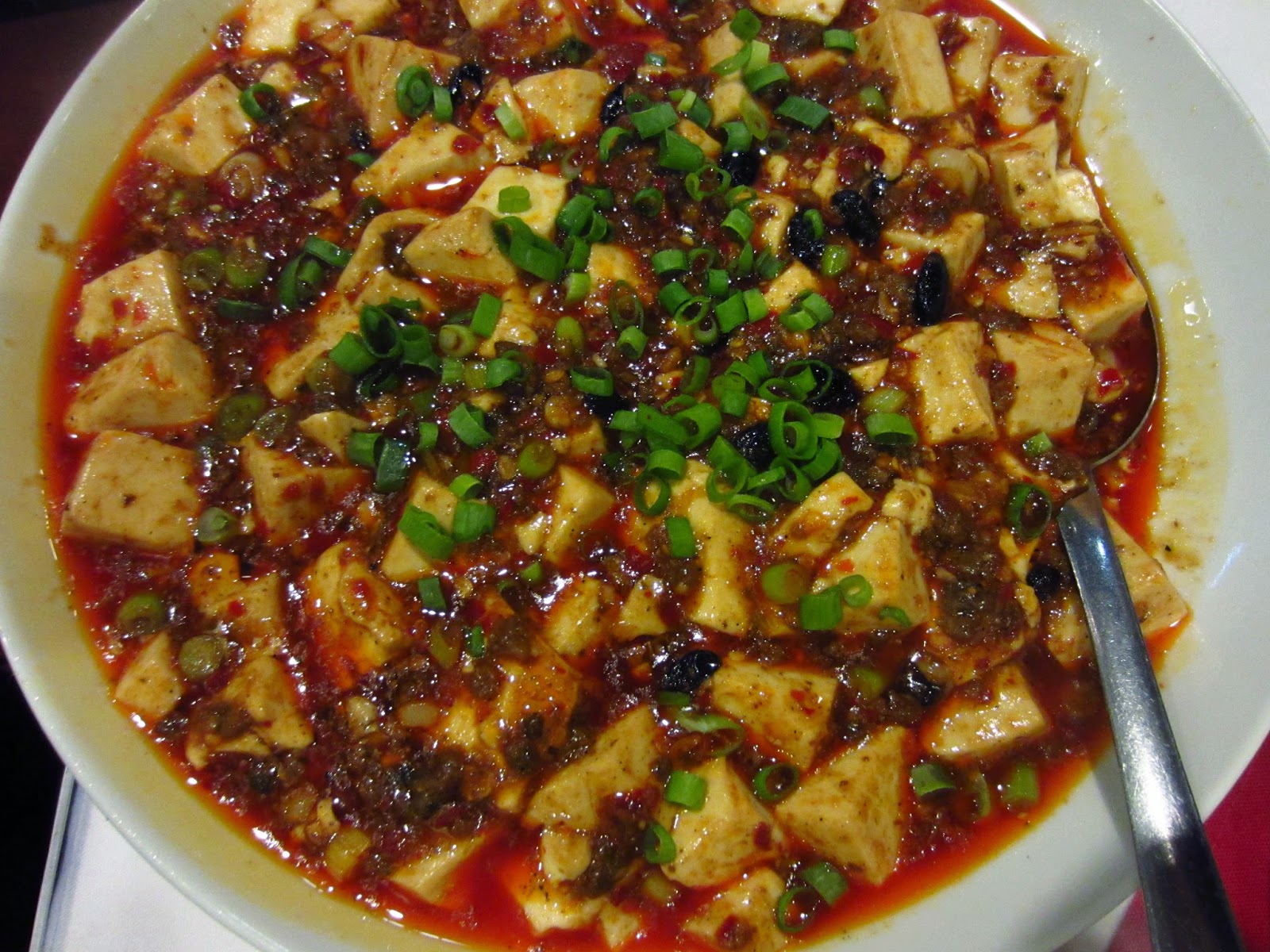 Thankfully when we were there, we were one of only two tables of Caucasians, and the rest of the half-filled restaurant was filled with native speakers; that’s always a good sign as far as I’m concerned. It’s the same as lots of pickups and big rigs parked outside a roadside diner.

The interior can use some work, but the place is clean. Portions are large, and service was excellent considering she was running solo with a half-full dining room. I will definitely go back, and welcome some spicy Sichuan food in south Austin for a change, instead of having to go way north or northwest. But dudes, we need some MA LA!