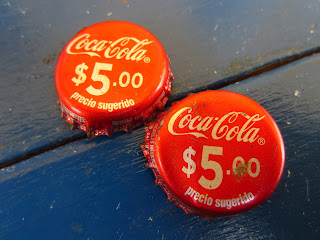 THIS is what you Mexican Coke caps are spozed to look like........

Shane and I had to run over to Montopolis Building Supply for a bull panel the other day, so we thought we’d grab some nearby lunch while we were in that neck of the woods. It came down to Ray’s Bar-B-Q near the north end of Montopolis (technically on Monsanto), because it was soul food Thursday, and Ray’s features some righteous soul food every Thursday. Our other choice was the inimitable Taco Rico, where Yolanda Sanchez Cornejo and her sister Araceli hold court; goddesses of comida Mexicana riquisimo puro. I had talked up Taco Rico so much over the last few months that Ray’s never had a chance.

If you’re heading south on Airport/183, about halfway twixt Montopolis and Callahan’s there’s a street on the right called Vargas Road; hang a right there and head west for three long blocks and you come up on a bustling little corner anchored by Coronado Studio, Vargas Food Mart, and a laundromat. To the right, on the northwest corner of Felix and Vargas, sits the little bright blue food trailer that is Taco Rico, on the western lip of the laundería parking lot. There’s only one picnic table for seating, but it is blessedly in the shade. If you keep heading west for a long block, you’ll tee into Montopolis Drive. 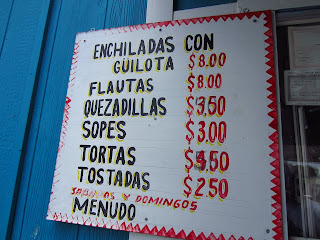 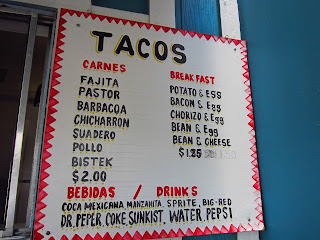 The menu is basic, an assortment of wonderfully cooked meats, available as tacos, sopes, tostados, flautas, quesadillas, tortas, or enchiladas. On Saturdays and Sundays she does menudo, which I’m quite sure is mind-numbingly good, but you’d have to get me to eat tripe to find out. You go to the window, place your order and pay. There are a few Spanish words you need to know: Para aquí means ‘for here’, para llevar means ‘to-go’. Con cebollas y cilantro means ‘should I add onions and cilantro on top’, and te quieres beber is taco-queen-speak for ‘what are you drinking’.

With the first glance at the menu there were a couple of Mexican terms that you probably won’t know. Guilota, as in “Enchiladas con Guilota”, left us clueless at first and no explanation came until later, once we had ordered it: what was translated from guilota as a “small chicken” was actually a quail. Suadero is translated by them as brisket, and by others as rib meat. A sope is a round, thickish tostada with a raised edge, made from fresh masa. All the rest of the menu items should be familiar. 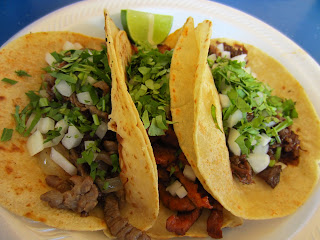 
What drew me to Taco Rico originally were reports of exquisite barbacoa tacos ($2), a shredded taco filling made from slow-cooked cow’s head mixed with chiles and spices. Done right, the meat is beefy, rich and unctuous, spicy, and not the least bit greasy; done wrong, and every bite is torture. If I didn’t know better, I’d swear that the sisters had wrapped a spiced-up calf’s head in maguey leaves and burlap and buried it underground with hot rocks for 12 hours or so. Taco Rico’s corn tortillas are fresh, packed to bulging with luscious barbacoa, topped with onions and cilantro, and your choice of the spicy red salsa or the rich avocado-green chile salsa. This is barbacoa done right. 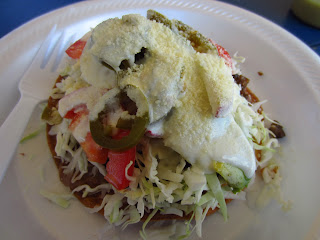 
Shane had heard my stories of Taco Rico and was pumped. I ordered a triple taco plate, all on corn, with onions and cilantro added: beef fajita, pork pastor, and the luscious barbacoa. I also ordered a tostada of suadero. A Mexican Coke rounded out the order. Shane duplicated my choices and in short order Yolanda popped out with the plates of grub. It was all as good as before, especially the barbacoa. I loved the suadero tostada: with a crispy homemade tortilla on the bottom and a mountain of cabbage, radishes, tomatoes, pickled chiles, onions, crema, and cotija on top. Fantastic stuff. Shane was so impressed he had to have another barbacoa taco, so I got a bistec this round, again, wonderful. In the realm of taco trucks, Taco Rico is king; in the realm of Mexican food, they reign supreme. It is no stretch to say that for what they serve, Taco Rico just could be the best Mexican joint in town. 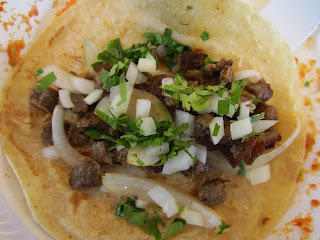